Open advice to all smokers 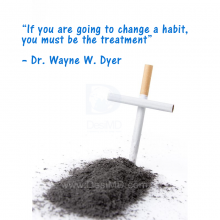 What started as a curiosity to smoke beedis, which were very cheap, ended up as a fancy to smoke cigarettes and the fancy, laid its firm foundations leading to addiction.

It all began during my young days when aided and abetted by my elder brother we started smoking beedis, which we used to call as “KHAKI CIGERETTS) just out of curiosity. Gradually we leaned towards real cigarettes and found ourselves practically addicted to smoking, though occasionally, because we were still in our colleges.

I was surprised how I imbibed this habit since my father was never a smoker. He was a tee-totaller and a staunch vegetarian. He disliked those who smoke. Obviously I was indulging in my habit secretly and never had the guts to even get caught. Being a shrewd teacher my father had his own suspicions. The smell after smoking acted as a trap for creating strong suspicions in my father. I still remember him saying “I am not sure, but can smell cigarettes from your breath. If I am right, better give up this harmful habit”. He never spoke again on the subject and believed I will give up. Initially he was wrong and later he was right.

The meager pocket money was sufficient to limit my smoking to only a few cigarettes a day and continued till I completed my graduation in medicine and surgery. During my Internship and Horsemanship I was getting stipend, which was then a big amount. And the cigarettes were very cheap then. I was therefore able to increase my number of cigarettes smoked daily.

When once I started earning I was my own boss and continued to smoke gradually increasing the number to 10 cigarettes a day.

Finally after I got married, I maintained a limit between 10 and 15 cigarettes a day. My wife tried her best to stop me from smoking and ultimately agreed upon a limit per day and she used to buy my quota per month. Like any good husband! I limited my number of cigarettes to a maximum of 15 a day and averaged around 12 a day.

Ours was a united Hindu family and my parents were with me. Therefore I never smoked while at home to respect my father’s thinking that I don’t smoke.

As years passed by the pressure was building up from all sources to give up smoking. My children were growing up and have been doing excellently well in their scholastics. Luckily my son did not develop my habit and till today he is a NON-SMOKER.

One fine morning I decided I should adopt some resolutions to stop smoking. As with others I took up new years resolution that I will not smoke after 12 midnight of the stepping in of the New Year. To do this I decided to complete all my cigarettes in balance and smoke to my hearts content since, anyway I will stop smoking with in few hours. That night I might have smoked double the number of cigarettes to call it a day.

The New Year arrived. I managed to remain a nonsmoker till evening. The old year passed but my old habit remained. I quickly took a fresh resolution that I will try my resolve from UGADI the Telugu new years day. Several resolutions were made postponing each time till either a birthday, marriage day etc., only to break them and ultimately I knew it was a futile attempt to give up. Each attempt to resolve only increased the number of cigarettes smoked. It only increased my guilt because I would bravely advertise my resolve to all friends and relations only to find myself with a cigarette in my hands.

I was all the more guilty because as a doctor I tell all my patients the bad effects of smoking on ones own lungs and how smoking leads to COPD (Chronic Obstructive Pulmonary Disease) and cancer of the lungs as well. I explain to them that the lung consists of millions of airspace called alveoli and the nicotine inhaled from the cigarette blocks these air spaces. I tell them that even the smoke emitted by them, which they puff out, is harmful to the bystanders also called passive smokers. I give them detailed information about the hazards of smoking and how we purchase a disease instead of getting it cured if present. I plead with them not to buy a nonexistent disease, which is smoking.

My guilt was a regular occurrence since I was regularly regular in smoking though a limited quantity. And my guilt increases day by day because I was a miserable wretch placed between smoking and giving advises against smoking.

Then came a day when one of my patients, a chain smoker himself, was bold enough to question my right to advise. I cannot forget the incident in my life. The conversation went:

Self: Why do you have to smoke nonstop? Do you know one of your lungs is totally gone. You may need to consult a specialist for removal of the affected lung if the other lung is reasonably healthy provided you stop smoking. I will organize the appointment and take you personally to the specialist.

Patient:  Doctor sahib. With all my respects to you may I ask you a frank question?

Self: Go ahead and ask.

I realized that I was advising a patient not to smoke with a cigarette in my own hand.

No wonder when he first said I have no right to advise him about smoking and its hazards, he was absolutely right to question my rights to advise him.

Patient:  Sir, the advice to stop smoking comes from you with a glowing cigarette in your hand.

And that was the beginning of what was to follow.

I took a deep puff from the cigarette I was holding in my hand and declared to the patient that would be the last cigarette in this life. So telling I put the stub on the floor and crushed it with my shoe, I told the patient that he would never see me smoking again nor hear I still smoke and also told him that I expect him to follow suit and quit smoking if not for anything, at least in the interest of his own health.

What turned out later was history.  From then on which is more than 30 years ago, I never touched a cigarette. On the other hand I developed hatred towards smoking and a dislike to those who smoke. The irony of the incident was I stopped smoking but the patient continued smoking till he died six months later.

Looking back, I made a resolve to set aside all the money that I saved from stopping to smoke, in a separate bank account and to my surprise the amount so saved was enough to perform the marriages of my son and my eldest daughter, not forgetting the fact that everything was cheaper during those days including the cost of search for suitable bride and groom!

This incident also made me realize that it is just not possible to give up smoking through resolutions or for that fact, anti-smoking procedures now available. The latter just doesn’t work without the active co-operation from the smoker. What is needed is a firm commitment and total control of your mind with a strong determined effort.

Without a firm determination and absolute control in mind no amount of resolutions will ever work. In my case, no doubt the incidence itself might have played its part. However, it required great deal of efforts and firm resolve that I will not touch a cigarette. Whenever temptation was trying to overtake my resolve I used to get myself reminded about the incidence and managed not to fall a prey to temptation.

Thanks to the incident 30 years ago, I am now free from smoking.

Foods to Eliminate Mucus from ..

Sometime due to allergy or at the onset of cold there is excess mucous that is
Home Remedies for Typhoid Feve..